THINGS TO DO AND EAT IN LA:

Home to endless beaches, nice weather (most of the time) and delicious food! There’s always something new going on in LA, with plenty of things that’ll keep you busy.

Anyone that knows me, knows I love going to LA/SoCal/Cali in general. I’d move there if I could! I’m constantly trying to resist the temptation of going every year, just so that I’d have the chance to travel to other locations I’ve never been. It’s definitely tough when the ticket prices are so low!

The last time we went was during June ’16. It’s only been a year but it feels like ages ago! I have to say, that was probably the hottest cali trip I’ve ever been on. It felt like Texas heat!

Even though it’s only been a year, there’s been soo many new eateries that have opened up since then! The list below may be a little outdated, but that’s all I have until I get to try the new places.

Continue reading below to see my recommendations!

626 Night Market – If you’re ever in LA during the summer, definitely try to go to the 626 Night Market, if your trip lands on the event dates. It’s one of the biggest food festivals in SoCal with hundreds of food, merchandise and entertainment options. I recommend going in a bigger group so that you can share and sample everything. It just wasn’t the same when it was only two of us, the second time around.

The Broad Museum – I originally came here for Yayoi Kusama’s infinity room, but there’s so much more than that to see! Highly recommend reserving advanced tickets.

The Getty – One of my favorite places to go! You can catch a better view of downtown here, compared to the Griffith Observatory.

LACMA “Urban Lights” – Day or night, there will always be tons of people here taking pictures.

Little Tokyo – A great area to just stroll through. There’s plenty of Japanese eateries around the area to try also.

Griffith Observatory – Nice place to go if you want to overlook the city of Los Angeles.

Santa Monica Pier/Boardwalk – Touristy, but a must if it’s your first time. You can also find Japadog on the boardwalk!

The Original Farmers Market – Found right next to The Grove, it was a nice place for us to have breakfast/early lunch at one of the many food stalls. After you’re done, the outdoor shopping center is right next door. We don’t really have anything like this in Texas because the weather is too hot!

Hsi Lai Temple – We went to this temple during our first visit to LA. It was a little out of the way but is worth the drive if you need something to do. It’s been about 5 years since we’ve been, but I remember that the views and temple grounds were breathtaking. It’s the perfect escape if you want to get away from the city.

Kang Hodong Baekjeong KBBQ – This is the one place I always recommend to anyone who asks. There’s an abundance of KBBQ joints in LA, but we always end up coming back to this one. It’s not all-you-can-eat but the quality makes it worth it. The original location is in K-town, but our favorite location so far is in Buena Park.

Mister Bossam – Three words: spicy, cheese, ribs! Everyone was completely skeptical when I first mentioned it, but it probably ended up as one of their favorite meals! Well, for a few of them anyway. Don’t knock it until you try it!

Mama Lu’s Dumpling House – We’ve always felt that Din Tai Fung in the states was overhyped. I mean it’s good, but not as good as the ones overseas. It just felt like there was less “soup” compared to the Asia locations. If you’re looking for soup dumplings we like Mama Lu’s! The chili wontons here are probably the best we’ve had so far. Get the sugarcane iced tea if they have it!

Howlin’ Rays – I never thought anything could beat Nashville’s Hattie B’s, but this is pretty close up there! I highly recommend going here if you have the time to wait. On a weekend, it could take up to 3 hours! If it’s possible, go during the weekday. I ordered the medium spice level and it had a pretty nice kick to it.

Maragume Monzo – I’ve been trying to go here since the first time we’ve ever been to LA! All I can say is that we’ve been missing out. I didn’t really make it a priority during our previous visits, but finally did after I had the best udon in Tokyo. We ordered the sea urchin cream udon and hot dragon udon. Both were perfection and brought back memories of our time in Japan!

Kimukatsu – 25-layers of pork cutlet goodness! This is probably the best we’ve tried in the states, that’s closest to the ones we had in Japan!

Fork-In Aussie Pie Kitchen – We absolutely loved this place! It was our last stop of the trip before heading to the airport. Luckily, it’s only 10 minutes away! The meat pies reminded me of a loaded pot pie, but topped AND stuffed with a savory goodness that’ll keep you wanting more. The first “tiger stack” we had included a steak and shiraz pie, with minty mushy peas, roasted garlic mashed potatoes, and mushroom gravy. It was to die for! The second “tiger stack” we ordered was the chicken tarragon pie, with Mac and 3 cheese, and sausage stuffing, with creamy thyme gravy. Both combinations were delicious. We’ll definitely be coming back here the next time we’re in LA.

Boiling Point – As many times as we’ve gone to LA, we finally got to try BP after our 5th trip. I’m not sure how people finish one pot of it themselves! The two of us shared one and I was stuffed. The Hokkaido milk tea is also a must!

Grand Central Market – A food hall located in Downtown LA. Home of the original Eggslut and many other eateries! 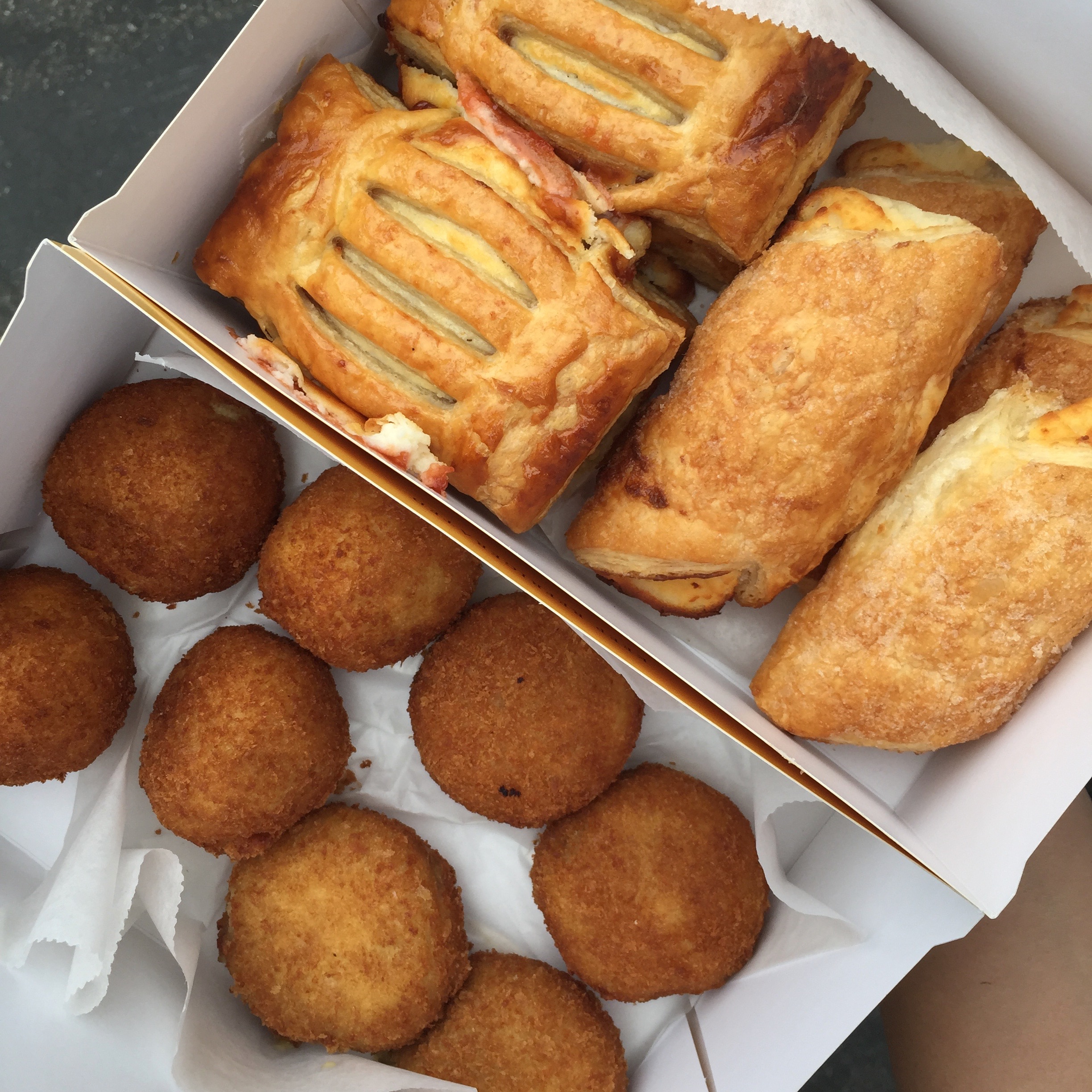 Afters Ice Cream – By now, everyone has probably tried or at least heard of Afters Ice Cream. If you haven’t, you’re missing out! Scoops of unique flavored ice cream sandwiched between a thin donut sandwich. The jasmine milk tea ice cream is my go-to. You can’t believe how many imitators there’s been since this place opened! But I guess that’s what happens when there isn’t a location outside of SoCal 🙁

The Pie Hole – I loveee custard pies! I love earl grey flavored desserts even more! When I saw this, I just had to try it. It did not disappoint! I tried this pie a few years ago and I’ve been craving it ever since.

Beard Papa’s – No trip is complete without a stop at Beard Papa’s, no matter what city/country you’re in. They have the best cream puffs! We used to bring boxes of these back for everyone.

7 Leaves – The best mung bean milk tea I’ve ever had! We need one of these in Dallas.

Botegga Louie – Cute place for desserts or even brunch! It’s located in downtown so parking might be troublesome depending on what time you go. If you plan on staying awhile, I think there’s a paid parking lot or garage nearby.

Lady M – I usually only get the crepe cakes here so I can’t speak for any of the other desserts. Between the original and matcha, I just prefer the original. I recently had the earl grey flavored crepe cake in NYC and it’s my favorite so far! It was seasonal so definitely get earl grey if you happen to see it.

If you have time to drive to Orange County, check out the OC Food & Travel Guide here:
https://sherryvu.com/oc-guide/

For more photos or places I haven’t listed, you can find it on IG under the hashtag #sherrytravelscali

I haven’t split up the Cali locations yet, so there will still be posts for all of California in one hashtag. I’ll update the links if I get a chance to change it.

Hello! My name is Sherry. I'm a content creator and blogger passionate about food, travel and lifestyle. I love to explore the world while promoting scenic destinations, searching for delicious food, and experiencing unforgettable adventures. When I'm not traveling, I enjoy immersing myself in my own city of Dallas/Fort Worth, TX, trying new restaurants and cooking. My goal is to inspire others to get out and experience the beauty of the world and what it has to offer.

Sukothai noodles 🍜 My favoriteee dish from @too

Temperatures finally warmed up a little for this w